St. Paul's, located on S. Broadway, has been a major center point of the village of Red Hook for more than 100 years.  The church is a red brick building, with grounds including a cemetery, a Parish Hall, and a parsonage.  St. Paul's, still an active church congregation after all these years of its existence, needs you! Our vision and mission is to follow God’s lead, grow in grace, and grow in service to others. To preach the Gospel, administer the sacraments, and worship God by celebrating His love and glory. We welcome everyone and faithfully serve the community and beyond. 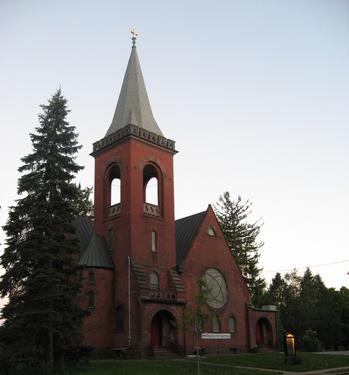 Participate in our Window Restoration Project

St. Paul's (Zion's) Evangelical Lutheran Church, located on South Broadway in Red Hook, has a long and vibrant heritage.  In 1932, the New York State Education Department placed a marker among the remaining graves at the original site (down by the Stone Church, Routes 9 and 9G) of what is now St. Paul's.  It reads, "Old Rhinebeck, original location of the village of Rhinebeck, site of the oldest church in the northern precinct of Dutchess County."  Historians now agree that St. Paul's is one of the oldest Lutheran churches in America.  The church was founded in 1715 by the German refugees, called the Palatines.  These refugees sought escape in the English colonies.  They settled in Northern Dutchess County and established what would become St. Paul's.

In 1715, a union church was founded of the German Reformed Church and the Lutheran Church.  The congregation of Palatines settled on land granted to Judge Henry Beekman by Queen Anne.  This site is located at the juncture of Routes 9 and 9G.

After the Civil War, the name of the church was changed to St. Paul's Evangelical Lutheran Church.  In 1884, the congregation voted to build a new church.  The cornerstone of the present day church was laid in 1889.  Over one thousand people gathered for the ceremony.  The church cost $19,207.63 and was paid in a year and a half due to the hard work and faith of the minister and congregation.  The current parsonage was built in 1903.  The Parish Hall was built in 1906.

On February 4, 1998, the church was designated as a historic site by the State of New York.  Then, on August 3, 1998, the church was so declared by the federal government.  A plaque outside the building reads, "St. Paul's (Zion's) Evangelical Lutheran Church has been placed on the national registry of historic places by the United States Department of the Interior.  August 4, 1889."